“Hide, do not show yourself in the light of the day,
when you disembark in the land of your fathers…”
Odyssey, Book XI

Mario was worried and obviously already regretted allowing us to enter on the sly loaded with metal and illegal immigrants.
All we actually wanted from him was to let us unload the material on the beach, but the people being used to do the job that day where working under the table, he said, and there was the risk of a crackdown.
He used the Italian expression for illegal employment: “black work”. Black like the skin of the young men I had brought in, whose faces you could barely make out in those dark streets at night, much like the dusty streets they had left behind them, the look of the hunted animal glimpsed only in dazling whites of great big eyes caught in the glare of headlights.
Black was also the colour of the sheets of fabric I spread out that morning on those remnants of dunes washed away by the advancing sea, a few yards a year.
For nomadic peoples, lighting fires and pitching camp on the steppes and in deserts must have been for centuries an act as simple and eloquent as prayer, just as that entire operation, designed to display our perennial, errant mouring, could appear contrived to us.
I had chosen those young men in particular, not because I regarded the as the latest arrivals, having now lost the aura of my mystery that always appears to have accompanied the stranger on his eventful disembarkation, but precisely because they were the sole heirs of the first colonists to settle here, the last survivors, in physique and posture, of what had once been a “body” in the West, in the now diaphanous flesh of history.

In order to recruit the I had gome directly to Franco, a seasonal worker in the resort and future ambassador of Ghana, universally known for his ability to organize other poeple’s work, the “others” being all or nearly all illegal immigrants working under the table, as Mario pointed out that morning.

Mario, the owner of the bathing estabilishment, saw me as part and parcel of that illegal immigrants, whose status did not worry him, as to the state. The state of abandonment – I replied – in which they had left that area.
I went to work that day on the beach with the apparent form and no title, as with the many paintings I had been unable to name, and like the many wretched princes who had for years, in the absens of No Man, divided up that area between them like the last, macabre spoils.
The structure of the work, divided on the ground into the various series of its scattered fragments, the came together in its entire imago only at a certain height, like the reconstituted image of a Father on high: the figure of the Ancestor.
Now no longer dwelling on high in the heavens but beached and unrecognizable.
Lost beneath so many ribs in the shadow of the shroud, observed from above with the artefic of flight, we all remembered the myth, tha anxious fingers of the blind Cyclops, groping in the dark for the hidden hero who gave his name as No Man and was one day, having returned home in disguise, to free that land from the formless chaos that reigned there.

Later on, for as long as the installation remained exposed to heavens like on offering, due to all the metal stuck into public land and the tarpaulins suggesting an unauthorized construction, nobody suspected the arcane form lying hidden there and we were left in peace, as people are left in peace where their arbitrary actions are feared.
There was, however, no trace of the hero as the tide swept in. 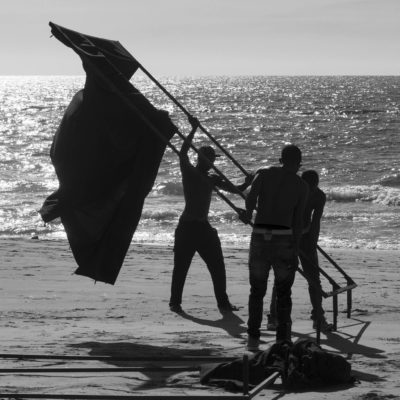 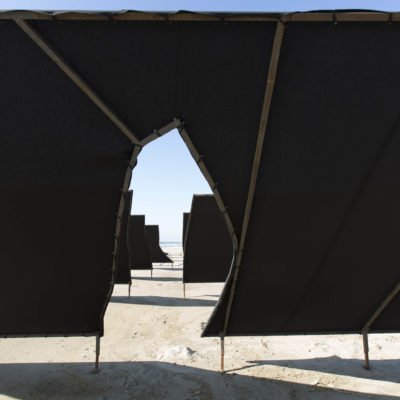 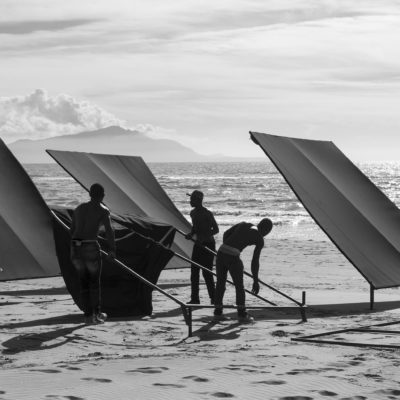 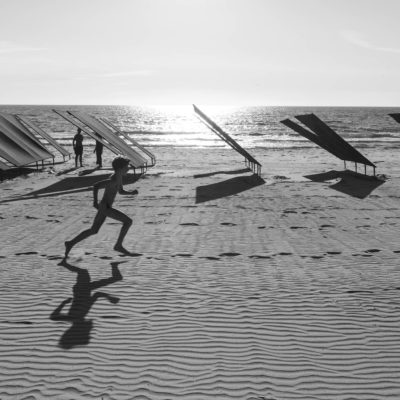 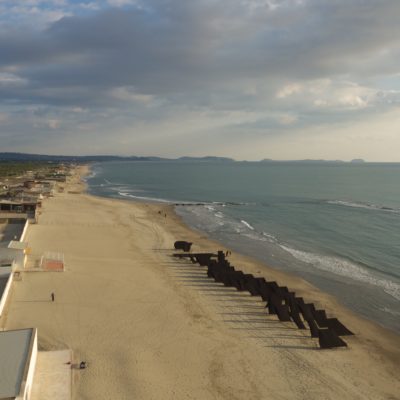 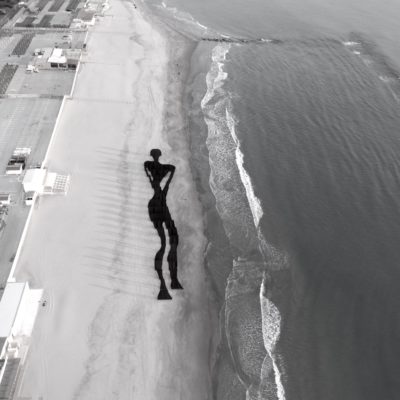 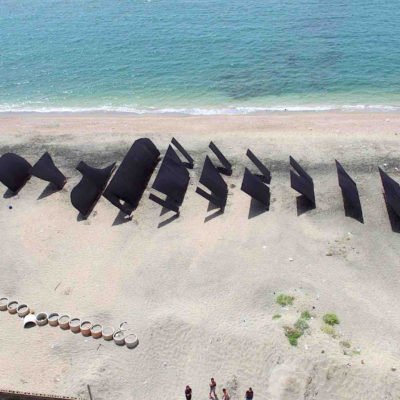 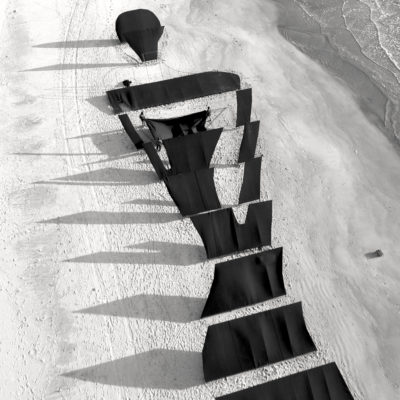 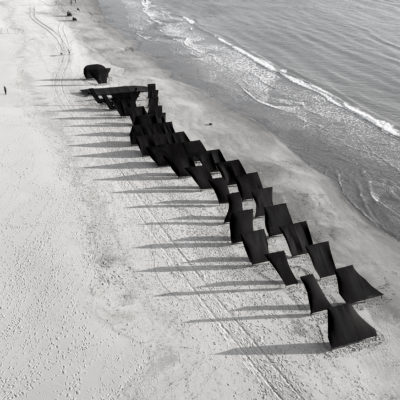 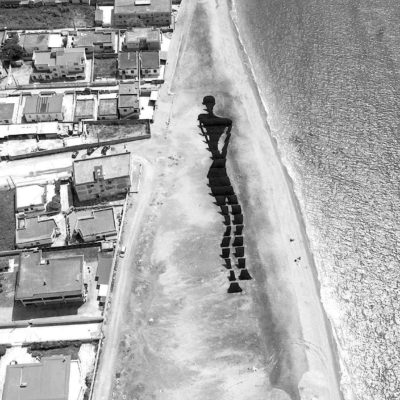 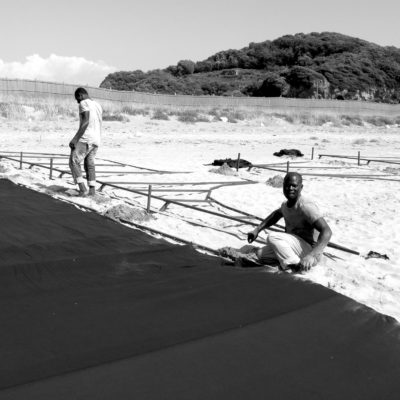 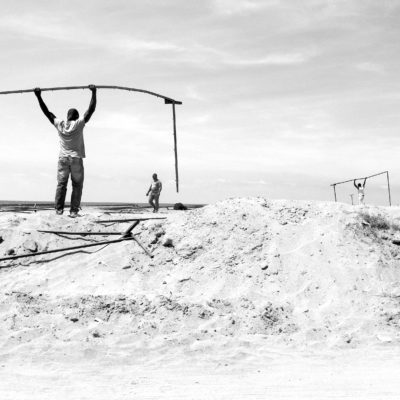 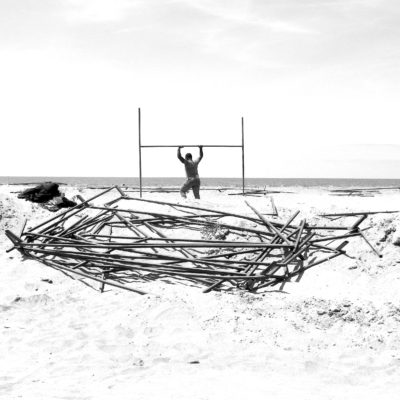 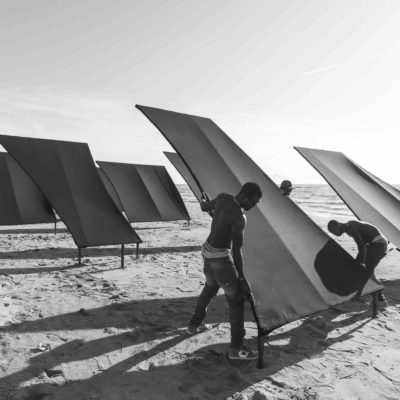 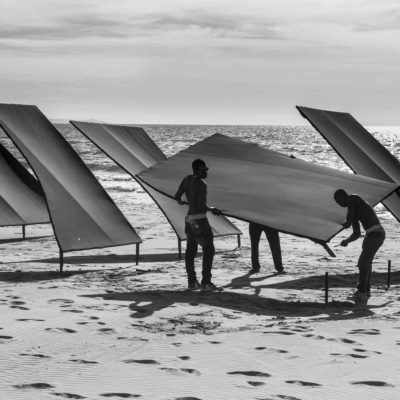 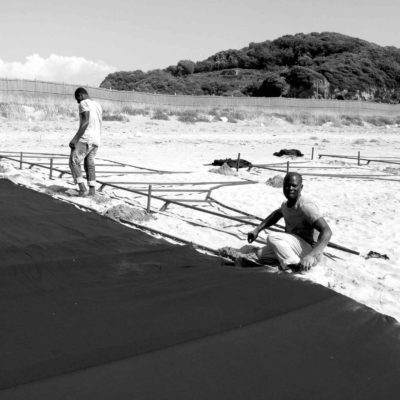 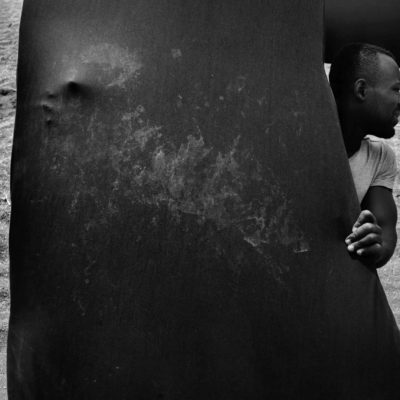 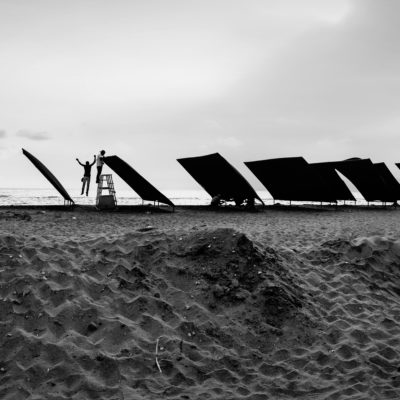 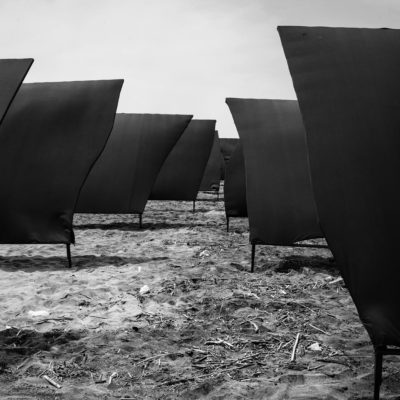 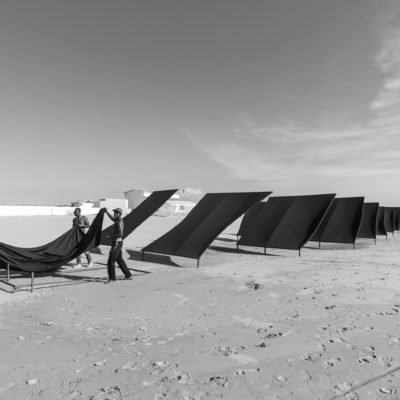 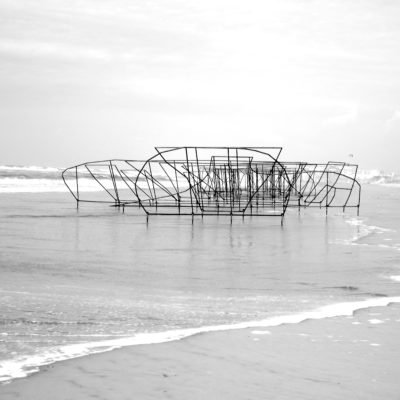 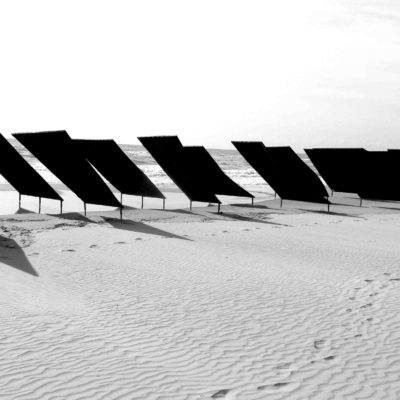 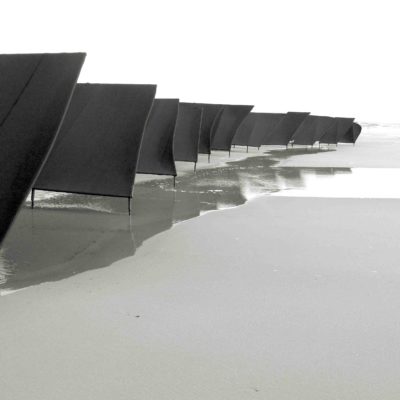 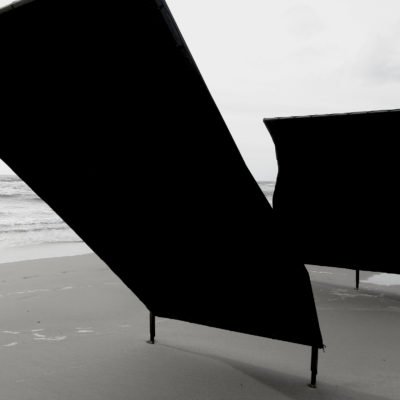